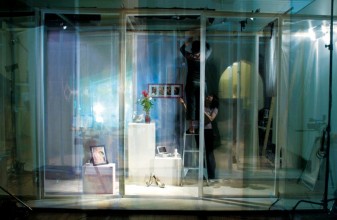 Time Capture, 2009. Image of stage and set constructed for shooting the images and video of participants in Time Capture.

At the International Women’s Day breakfast in Maitland in 2007, the idea was borne to capture the lives of women in Maitland at the current time. A steering committee consisting of women from diverse backgrounds was established to advance the project. A concept was developed to prepare a time capsule and the idea evolved into presenting the lives of women in an innovative art installation, to be built into the redevelopment of Maitland’s art gallery, and exhibited at MRAG for next 25 years.

Thanks to generosity of Coal and Allied, Maitland City Council and Office for Women NSW Premier’s Department, funding was obtained to engage artist Lara O’Reilly to develop the concept for the project.

O’Reilly  had previously worked on other site-specific installations; in film and photography mediums, sculpture, performance and sound. Her achievements included the 2004 Basil and Muriel Hooper Scholarship, the 2005 National Marten Bequest Travel Scholarship for Sculpture, and the 2008 Ian Potter Cultural Trust Grant. Supported by the Department of Foreign Affair and Trade, Lara created an installation spanning three levels of a deteriorated 300 year old military chapel on Kotlin Island, St Petersburg.

O’Reilly began working on the project in November 2007. One hundred women from the Maitland region were involved, all from a diverse range of backgrounds reflecting the community. In one case, four generations of women from one family participated. Participants were asked to consider a series of questions, and bring objects which reflected their responses to MRAG at a set time for filming. The questions related to each woman’s place in the world, her sense of connection to Maitland and items of personal significance. O’Reilly spent several months compiling and editing footage, which were then drawn together into a series of narrative fragments. Each participant is featured in several fragments. They play at random on a six metre projection wall embedded within the new stairwell of the MRAG building, with viewing stations on both floors of the building.

Click on the page numbers below to see more about Time Capture.

An art installation entitled Time Capture, created to capture the experiences and images of women across Maitland, will have a special personal significance for one MCC staff member as it will showcase four generations of her family for the next quarter of a century.

When Joe Eisenberg, Cultural Director of MRAG, asked Judy Henry early last year to represent the MRAG Members and gallery volunteers in an art installation that would feature in the art gallery until 2034, she happily agreed.

Today, months away from the artworks unveiling, Judy, 56, and her daughter Kimberley, 37, grand-daughter Lily, 8, and mother, Margaret, 79, are keen to see their efforts for the project on display.

Time Capture will be installed into the staircase of the new wing of the gallery building. Involving film, images and light and made up of several hours of footage, the art project has been designed by artist Lara O’Reilly.

The project is about strengthening and celebrating the diversity in our community, as well as what women feel about their community. The dozens of women involved in the project are all from a broad range of backgrounds, highlighting the social and cultural diversity of the area. MCC’s Community Services department secured funding of over $200,000 from Coal and Allied Community Trust for the project.

I feel it’s a real honour to be part of this project and to have 4 generations involved said Judy. In 25 years time, more generations will be able to visit the gallery. It will be for everybody, everyone who has been involved.

Judy’s grand-daughter Lily will be 33 before the installation closes. I’m looking into the future, when Lily grows older. She’ll have a daughter and she’ll be able to bring her to the gallery and say, ‘this is your family’, Judy says.

Judy’s own life history has never strayed far from Maitland. Her mother and father emigrated from Scotland to Australia, and lived for a short time in Sydney before settling in Tea Gardens shortly before Judy was born. For a while her family lived in Charlestown, moving to Maitland when Judy was in her early teens. When she was 16, she met Mal Henry. Today Mal and Judy live in a gorgeous homestead in Paterson. They will celebrate their 38th wedding anniversary this year. Judy has worked professionally in the art industry all her life, first as a photographic colourist (at the Model Studio from 66-71) and now as an exhibiting artist and member of gallery staff. She and her husband Mal also run their own business.

Time Capture participants were guided by a series of questions, asking them to choose favourite or significant items. Among other things Judy chose a painting and bronze sculpture of her own making. The painting is called Where Do You Belong and was a painting she began after visiting Scotland in 1997, meeting many of her extended relatives for the first time.

To Judy, each item’s significance not only meant something to her own life, but helped contextualise and give meaning to her daughters; mothers; and granddaughters. Family photos, the NSW Flag, a Scottish kilt and Judy’s African Djemba Drum (that Judy has played for 5 years) also featured in her significant items.

As Merchandise Coordinator at MRAG, Judy has worked part time during the closure of the building, extending the number of artists and designers that will sell their unique and beautiful items such as jewellery, gifts, books and cards in the gallery’s gift shop. Since 2004, Judy has played her part in all aspects of the gallery, exhibiting her works in shows, volunteering at all manner of MRAG events, and representing the MRAG members in the MRAGM committee. Anything that was going on, I’d be involved in Judy laughs. Her efforts for the gallery members in organising coach trips to popular art events like the Archibald Prize exhibition in Sydney, has raised thousands of dollars over the years.

Time Capture will be launched in late 2009 after the art gallery reopens.