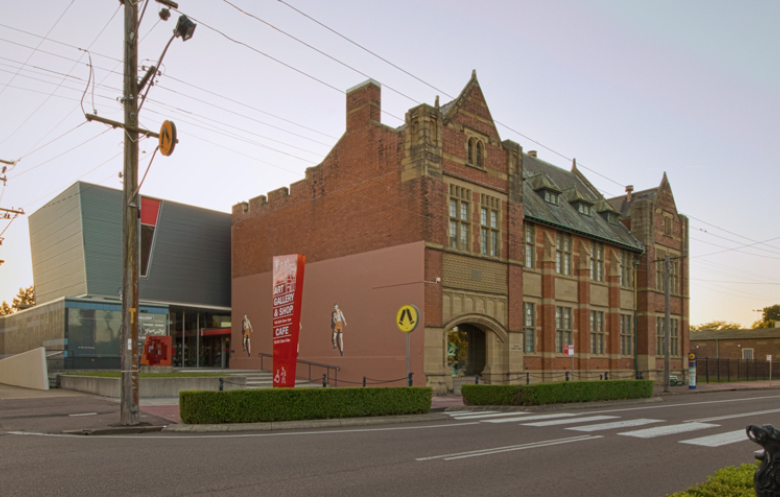 A History of the Maitland Regional Art Gallery Building & Site

Like many other parts of Maitland, the MRAG site and its buildings have a fascinating history.

Records show buildings existing on the site from around 1830, being variously used as a tailor’s, a candle factory, for soap making, and as a general store. From the mid-1850s  until 1892  a three storey brick building was used as a bulk warehouse for a local merchant before being operated as the Northumberland Coach and Buggy Factory.

In 1892 the site was acquired by the NSW government for the Maitland Technical College which moved there following adaptions to the existing buildings on the site.

In 1908, the Government Architects Office, under Walter Liberty Vernon, proposed a grand public building for the Technical College and Technical Museum. The main building with its impressive High Street façade, marble staircase and intricate stained glass skylight was opened in 1910 and is now used as a major part of the Gallery complex.

As soon as 1912, shortage of space led to an additional two storey block of classrooms, again designed by Vernon, being built, and this building is now the Art Factory. Together these buildings served the college for 75 years.

The flood of 1955 destroyed most of the College records and ruined the museum at the site. The flood marker is currently displayed in the original entrance and is an astonishing site to behold.

1986 saw the Technical College move to a new premise at Metford, and in the following year the site and buildings went into private ownership until 2002 when they were acquired by Maitland City Council as the home for the Maitland Regional Art Gallery, which opened at the site in November 2003.

The gallery then operated in the two existing buildings until 2008 when it closed for a significant renovations and extension. Cultural Director Emeritus Joe Eisenberg oversaw the development of the new gallery, featuring a contemporary new ‘infill’ building that provides a magnificent link between the two older buildings.

The current MRAG complex was opened on 15 August 2009 by the artist Margaret Olley AC; it comprises a café, shop, five major exhibition spaces and six smaller areas including a space dedicated to children.

In the following year, the new building and its architect, Paul Berkemeier, received several prestigious awards including the Australian Institute of Architects’ Premier’s Prize, and a Local Government Cultural Award for Cultural Infrastructure for a community of more than 60,000. 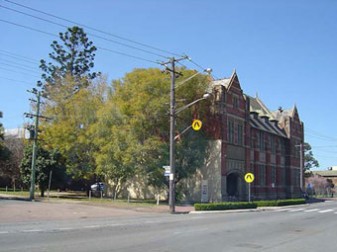 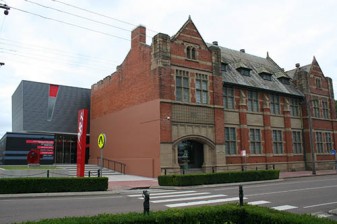 Above: Maitland Regional Art Gallery, photograph taken in 2009 after the second and final stage of redevelopment.