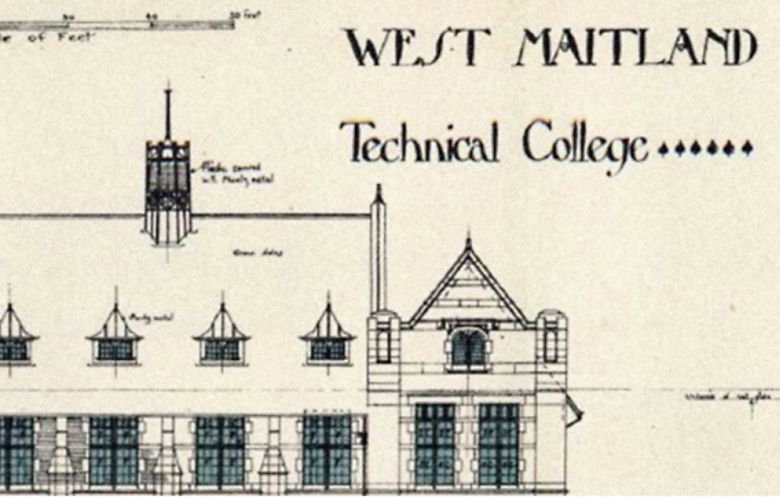 The MRAG complex consists of three complementary parts – the impressive High Street facade built in 1910, the second rear building that opened in 1912, and, joining these two, the new gallery spaces and facilities that opened in 2009.

The original building is located at the front of the High Street site. Architecturally, it is one of the most significant buildings in Maitland, and at the time of its opening it was described as one of the finest building of its kind in the State.

Some of the key features of this building are:

This building was a more modest, utilitarian, two storey construction built on the north-west corner of the block. Looking closely at the brickwork of this and the earlier building, clearly the intention was that they were to be eventually joined by a walkway.

Given the use of this building as classrooms for carpentry, building and plumbing there is ample natural light. The two floors are linked by an internal staircase much less grand than the one in the front building.

This building is now used as an interactive space for children’s and young people’s workshops, exhibitions and other activities, suitably called the Art Factory.

The brief for the new extension was to respect and acknowledge the older, heritage buildings while also designing a 21st century gallery; as such, it adheres to the intentions of the original site as a place for education and inspiration.

The 2009 addition is an infill between the two heritage buildings that provides links with, and contrasts to, the older structures. There is no attempt to mimic the older style and material of the existing buildings; the extension is a bold asymmetrical design with a geometric façade and architectural features of glass and metal. The magnificent two storey void is the heart of the building where the innovative integration of old and new can be witnessed.

The new building provides extensive contemporary gallery accommodation for both visiting collections and permanent exhibits. The main spaces are simple and flexible, and while they display a fascinating interface between the historical and the contemporary in terms of architecture, it is the art itself that is emphasised – the architecture is a stunning complement to the art on display.

This is a building that was designed for a specific purpose which it fulfills seamlessly, providing an inspiring and revitalised space for the community of Maitland and its visitors.