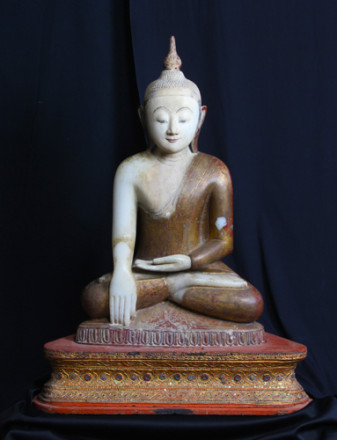 Nothing is lost in the universe – Buddha

Sitting peacefully, at the top of MRAG’s grand marble staircase is a serene Burmese Buddha. The Buddha sits patiently, waiting to greet those seeking ‘enlightenment’ in the art gallery.

This Buddha belongs to the small sub-collection within the MRAG Collection comprising of Asian artworks. Centuries old Chinese scrolls, ceramic funerary urns, terracotta Thai jars, Asian paintings and the ornate Temple Doors that can be seen close by, have all found their way, over time and distance to MRAG – thanks to donations made by one of our generous benefactors.

This Buddha is from Mandalay, Myanmar (Burma) and was created in the late 19th Century. He is made from Mandalay alabaster that has been gilt and lacquered and he is seated on a decorative lacquered wood base inlaid with appliquéd glass.

In Buddhist iconography every Buddha imparts a message by the way his hands are placed. Our Buddha has one hand resting gently in his lap, which is to remind us to seek peace within ourselves. His right hand is touching the ground depicting the Buddha calling the earth to witness his good deeds in front of Mara (one of Buddha’s demons) and also interpreted as a sign of determination.

As in Buddha’s teachings ‘Nothing is lost in the universe’ and it is wonderful to know that this Buddha has not been lost, but is once more on display to be viewed by new audiences, thanks to the generosity of another.