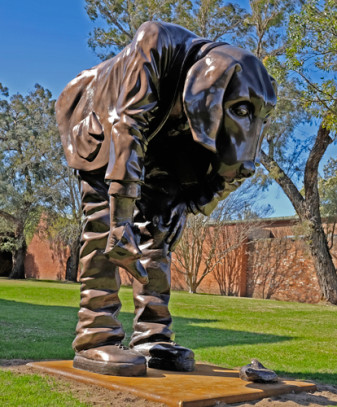 If you have visited Maitland Regional Art Gallery you are sure to have noticed, in the grounds of the art gallery, a very large dog named Fetch Boy. In 2011 artists Gillie and Marc Schattner contacted MRAG to offer their latest sculpture to the MRAG Collection as a donation. Since our grand re-opening in 2009, MRAG has been eager to develop a sculpture garden in the grounds of MRAG, so we jumped at the opportunity to have Fetch Boy join our other outdoor sculptures by artists Michael Garth and Paul Selwood.

Gillie and Marc Schattner are a husband and wife artistic team and they are painters and sculptors with a particular bent towards works with a message, many featuring dogs, which are inspired by their golden retriever Moby. Fetch Boy’s full title is actually ‘Fetch Boy’ – he thought it was going to be totally out of character but there is a first time for everything’, and this title reflects the artists’ belief that it only takes a few small actions by each of us to help our environment.

Fetch Boy is three metres tall and getting him here was a task in itself, taking four people to manoeuvre him off the Artwork Transport truck and into position, and he attracted much attention as soon as he arrived at MRAG. Within half an hour of him being placed in his grassy, well fenced ‘yard’ we had people come in, who had never been inside the gallery before, asking about our dog and if they could get a closer look. Within a day we had the Maitland Mercury down to take a photo for a front page feature, and within two days the Sydney Telegraph were in touch to take photos and write a story. Within a week a new route had been established by families visiting the gallery that incorporated a visit to Fetch Boy before coming through the front doors.

We think he deserves the attention, so if you haven’t already done so, come and meet Fetch Boy.