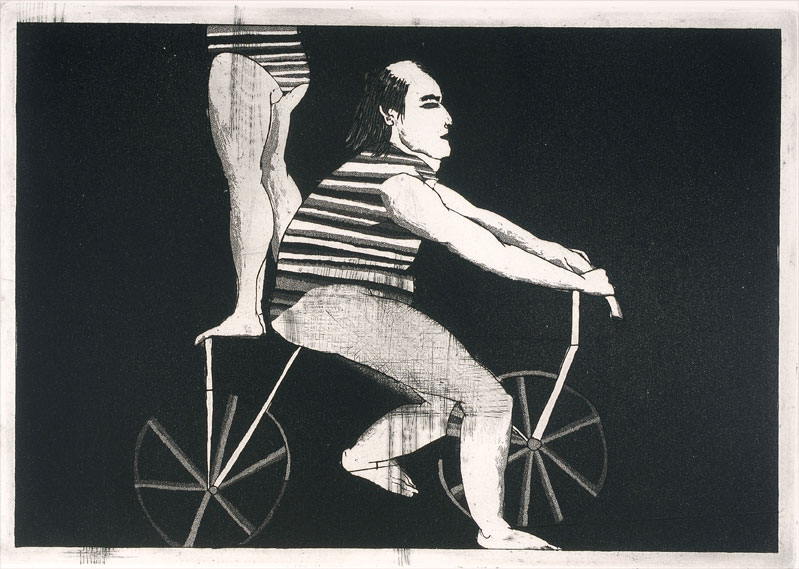 As the inaugural venue of a new touring exhibition the Creative Power, the art of George Baldessin Maitland Regional Art Gallery (MRAG) in conjunction with Maitland City Council is excited to bring to Maitland the art of one of Australia’s most influential and important printmakers from the 1960s and 70’s. The exhibition Creative Power, the art of George Baldessin is being toured by MRAG and will visit 17 venues across the east coast of Australia.

The work of George Baldessin (1939 – 1978) is represented in all major art galleries and collections around Australia, as well as the Museum of Modern Art and the Guggenheim Museum in New York, and the British Museum in London.  Baldessin represented Australia at the Sao Paolo Biennale alongside Imants Tillers in 1975 and is perhaps best known for his popular giant Pears sculpture at the entrance to the National Gallery of Australia in Canberra.

Despite his incredibly short life (he was 39 years old when he died in a car accident in 1978), he left a huge body of work which continues to impress and astonish with its contemporary feel.

The exhibition includes a selection of prints and drawings and is curated by Tess Edwards Baldessin, the artist’s widow. The works in this travelling exhibition show the development of Baldessin’s various themes as well as his very individual style.

From his first small etchings of circus performers and Fellini-esque characters, his work developed in scope and scale, passing through the “Personage” series, “Factory Smoke”, “Magdalene“ and “Emblems” series.

Baldessin combines and re-combines different elements to make new narratives and conceptual meaning.  The pear becomes the woman, the hat the emblem, and the emblem the woman again. This creative “play” is indicative of Baldessin’s huge talent and confidence beyond his artistic years. His relentless pace to progress meant that he left a mature body of work worthy of a significantly older artist.

With the opening celebration 8 September 3-5pm Creative Power, the art of George Baldessin will open at MRAG alongside 4 other exhibitions and be on show in Maitland until 11 November 2012 after which the exhibition will tour extensively.

Come and enjoy a wonderful evening to thrill the senses entry is free and everyone is welcome.

Postcards and Education kits can also be supplied.