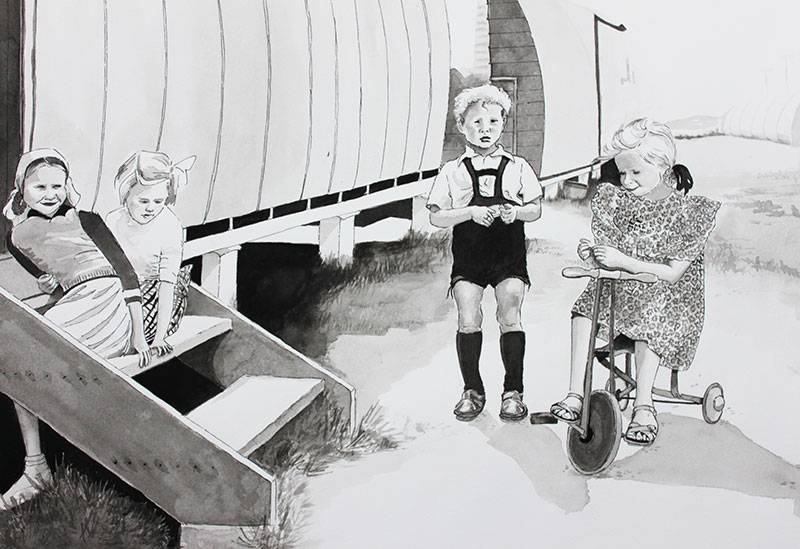 The Greta Migrant camp, as it became known, is a site just north of Maitland.  The Greta Migrant Camp became home to thousands of people evacuate by war-torn Europe. Between the years 1949-1960 this camp became the venue for a massive immigration program. In the exhibition Displaced, artists Vivienne Dadour and Gail Burrows give voice to the story of these people, where they came from, where they went to and their history of settling into Australia.

Since the camp closed in 1960 it has slowly sunk back into the landscape obliterating much of the built areas but leaving many traces of its previous use. It is estimated that over 100,000 migrants went through the camp.

Gail Burrows empathy for people empowers her art practice which seeks to recognise and validate individuals and communities. In this exhibition, Burrows spent time with the people who lived in the camp, interviewing them, enjoying afternoon or morning tea and listening to the stories of those displaced.

The influx of European settlers changed the face and flavour of our Anglo-Australia bringing diversity and bounty to our culture helping to fashion our Nation.

Gail Burrows monochromatic work gives voice to the starkness of the existence within the Greta Migrant camp which is juxtaposed with colourful and lively designs on paper and textiles; together these artworks contrasts the richness of heritage brought here by these European settlers.

Displaced: Traces in the Landscape (the titled used for Dadour’s telling of the camp) aligns with the political sub-texts often found in her strong artistic practice. Dadour’s concern is in documenting what may have been obliterated, ignored, hidden or obscured.

Dadour made many site visits from 2010-2013, which became a form of ‘forensic fieldwork’ as she engaged with and documented photographically the various remnants and traces of occupation still present in the surviving landscape. Dadour explained

“Each time I returned I would always find new lines of inquiry as I came to understand the site as a palimpsest, a kind of parchment where different cultures had inscribed their presence.”

These artists bring together an experience of a place in time, a vision of history and the telling of individual stories.