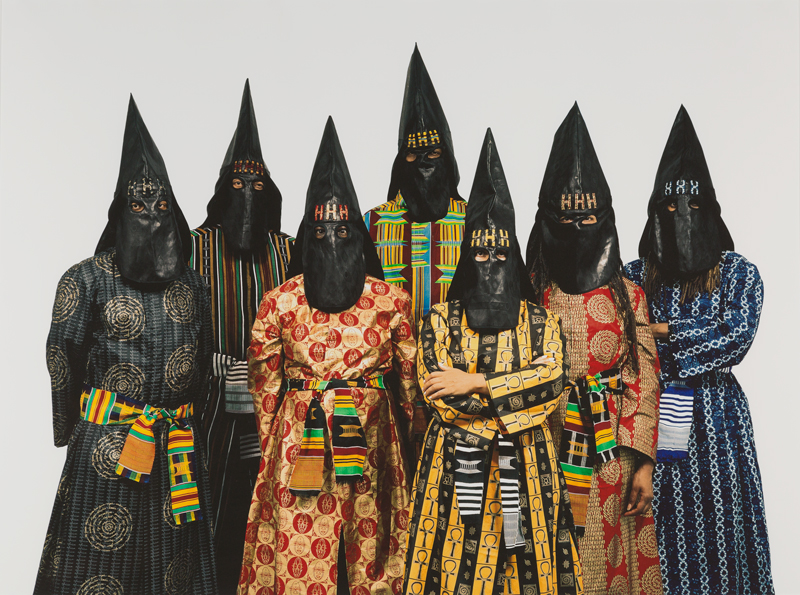 Fiona Foley is a contemporary Australian artist with a diverse practice that encompasses painting, printmaking, video, sculpture, installation and photography. Her art is influenced by her Badtjala heritage, the Traditional Owners of the Fraser Island region in Queensland, and her extensive body of work expresses her concerns about the crimes of colonialism, racial injustice and the complexities of race relations within Australia and also histories and undercurrents of prejudice and racial hatred in other cultures around the world.

This series of photographs, the HHH Series, was created by Foley during a five month residency with the International Studio and Curatorial Program, New York, in 2004. In this series Foley subverts the common symbols identifiable with the Ku Klux Klan, (the KKK), the infamous organisation from the USA known for its violence in pursuing its white supremacist agenda. Foley has recreated the robes and hoods of the KKK with colourful African fabrics worn by black American models, inverting the commonly identifiable imagery and racist intent of the KKK. Her title, HHH (Hedonistic Honky Haters) and vibrant images are a humorous, yet pointed, revision of the original source. It was Foley’s intent to engage the viewer on an emotional level by creating aesthetically beautiful images with a jarring edge, and a bit of humour thrown in, and provoke her audiences to contemplate the complexities of race relations. The direct gaze from the near- life-size portraits confront and challenge the viewer to consider their own feelings about racism.