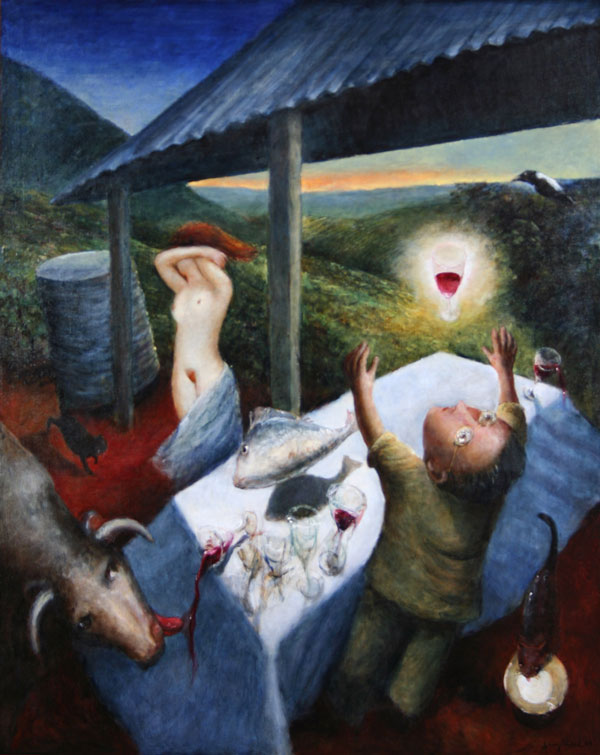 This exhibition, curated by Gavin Wilson, is a celebration of  the great Hunter Valley winemaker, Maurice O’Shea (1897 – 1956) by his nephew, the renowned artist Garry Shead.

Maurice O’Shea, (1897-1956) was a central figure in the development of Australia’s wine industry. He was regarded by authorities, such as, Len Evans, Max Lake and James Halliday as the country’s greatest vigneron. In the mid 1980s, James Halliday drank from a bottle of the 1937 Mount Pleasant Mountain ‘A’ Dry Red and wrote: ‘Those who have tasted the 1937 Mountain ‘A’ will need no persuasion that O’Shea was capable of making the perfect wine  … a wine that will live with me for the rest of my days…’.

The son of an Irish-born wine and spirit merchant and French-born mother, O’Shea trained in viticulture and analytical chemistry at the university of Montpellier. In 1921, he returned to Australia and established the family vineyard at Pokolbin that he named Mount Pleasant. From 1921 until his death in 1956, O’Shea would never miss a vintage. In 1932, he sold a major share in the vineyard to the McWilliams family, allowing him to concentrate solely on the art of making fine wine. Maurice O’Shea was Garry Shead’s uncle and  mentor. As stated by the exhibition curator Gavin Wilson ‘Love on Mount Pleasant: Garry Shead toasts Maurice O’Shea is an evolving series of paintings and graphics that began in 1966, investigating and celebrating the life and passions of a great creative spirit.’