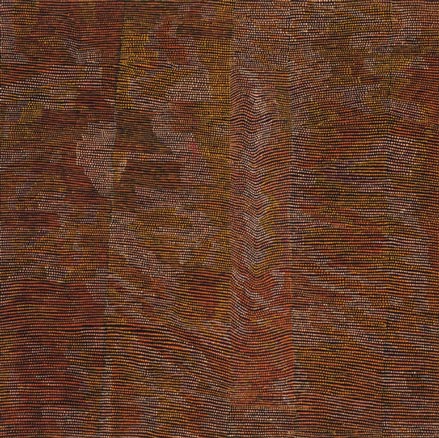 Papunya Tula Women’s Art is an exhibition of 43 paintings all created by the women artists supported by Aboriginal owned and directed company Papunya Tula Artists. Many of the artists in this exhibition were relatives of the male artists, who for over twenty-five years had witnessed the Papunya Tula art movement’s rise from relative obscurity to celebrated phenomenon.

The women’s initially timid foray into their own practice quickly evolved into a movement of its own. Colourful, gestural experiments described the familiar iconography of the desert in new and exciting ways. Unrestricted by perceived conventions, they began to carve out a unique visual language that for millennia had been painted on the contours of women’s breasts and shoulders.

Papunya Tula Women’s Art, visually charts the Papunya Tula women through their first decade and a half of painting. It is a sensitive body of work which represents each of the significant female artists who participated in the pivotal time.