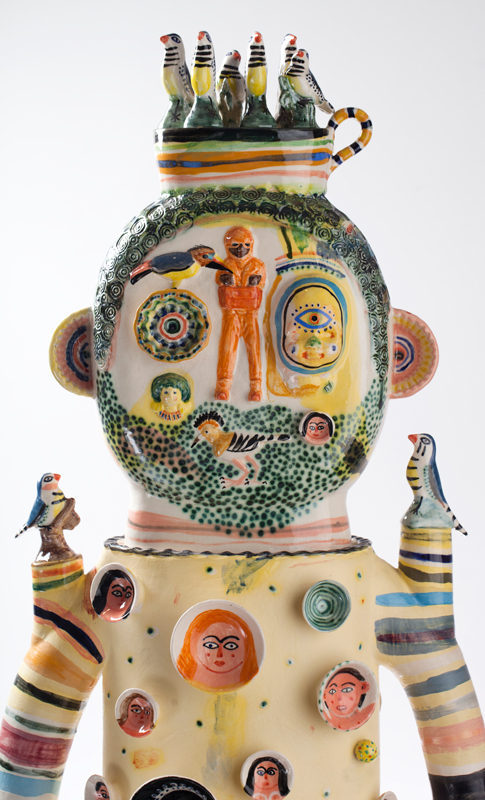 Bastard Son of Royal Doulton is a survey exhibition of ceramics, objects and works on paper which uncovers Stephen Bird’s vibrant watercolour painting practice and its influence on his well-known ceramic works.

Stephen Bird was born in England and moved to Scotland at the age of seven, he studied in Scotland and Cyprus. The exhibition surveys the past 20 years of the artists’ practice, including early works which reflect Bird’s travels to India and Nepal before settling in Australia in 1999. These works
including paper constructions, watercolours, ceramics and mosaics from Stephen’s Dundee studio have not been shown previously in Australia.

Stephen Bird makes highly individualistic ceramics that toy with convention. The deliberate use of industrial techniques and materials of his hometown, Stoke-on-Trent, the town in which Royal Doulton, Spode and Wedgewood were founded, form a practice he has dubbed “Industrial Sabotage”.

Throughout the exhibition, Bird’s mastery of glazing techniques and applied decoration on ceramics is matched by dazzlingly bright watercolours and intense graphic detail of works on responses to the strange and dramatic Australian landscape are explored in more recent works. The previously unseen
watercolours are literal recordings of an event or experience, while his ceramics play with these ideas, incorporating irony and humour into comically tragic tableaux.