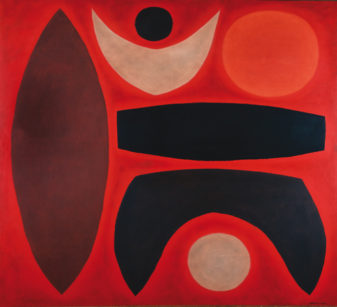 In 1975, Brough House, in Church Street Maitland, was refurbished to become the first gallery space for the new Maitland City Art Gallery and artworks previously hanging in Maitland City Council buildings were assembled into a formal collection and exhibited in the gallery.

The MRAG Collection continued to grow through purchases made by the art gallery and the Gallery Society, winning entries from the Maitland Art Prize, and gifts from the community and benefactors. Artworks acquired into the collection over that period include works by renowned Australian artists such as William Dobell, Margaret Olley, George Baldessin, Charles Blackman, Brett Whiteley and Tim Leura Tjapaltjarri.

In 2003 the art gallery moved to its present location in High Street Maitland and then became known as Maitland Regional Art Gallery. In 2005 MRAG’s collection took on a new direction as a result of a new collection policy which was to focus on collecting works on paper. Since then the MRAG Collection has grown considerably from 700 artworks to over 4000 artworks, due to discerning acquisitions by the gallery, as well as donations to the collection made by generous artists and art collectors. Artworks acquired into the collection since 2005 include works by Sidney Nolan, Tim Storrier, James Gleeson, Martin Sharp, Salvatore Zofrea, John Olsen, Euan Macleod, Suzanne Archer, Alan Jones, Ken Whisson, Adrian Lockhardt, Judy Watson, Gloria Petyarre and Lloyd Rees.

In 2009 an award winning extension and renovation of the building was completed, expanding the gallery from three gallery spaces to eleven. The larger facility enabled MRAG to exhibit more of its collection on a semi-permanent basis throughout the building, as well as individual highlighted exhibitions.

Although the main focus of the MRAG Collection is now works on paper, the collection today is quite diverse and includes: sculptures, paintings and photography; drawings, paintings, prints and Aboriginal bark paintings. The collection also includes sub-collections featuring historical photographs of Maitland; a collection of Les Darcy memorabilia; and Asian, African and Pacific Islander artworks.