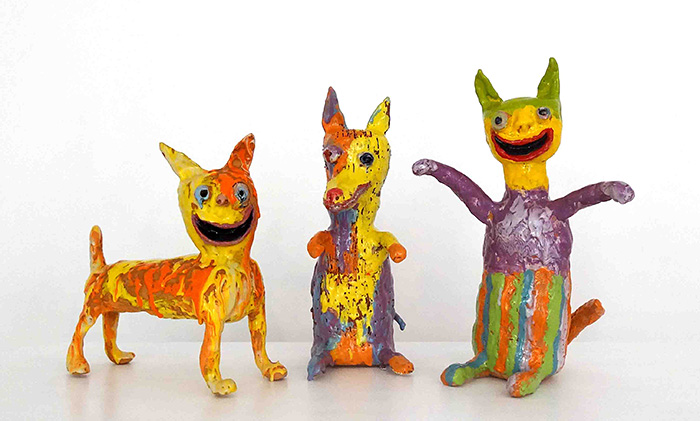 Jim Cooper: My family the album and their animals

Jim Cooper’s ceramic sculptures push clay to its absolute limits while adhering to and confirming his fine art intent. His installations typically include more than 100 pieces – with the largest, Peppermints and Incense, having 1000 individual pieces. The installations of figures with colourful glazes are the result of more than 20 years of refinement, during which time Jim has been experimenting with modelling clay, firing techniques and glazes. In his major installation works from the last three years – Sgt P, 2007, Peppermints and Incense, 2008, and It’s All Too Beautiful, 2009 – Jim has re-imagined record covers from the psychedelic era of the 1960s and 70s, giving them new life in three dimensions whilst celebrating the hand-made with vigorously modelled figurative works. The challenges inherent in constructing these figurative works contradict the casual and playful essence of Jim’s installations and attest to Jim’s skill and determination to continually reconstruct our understanding of ‘ceramics’ by developing fresh and dynamic narrative installations.

Jim’s interest in ceramics was sparked as a child when his mother, who was doing a night class in ceramics, brought home clay that she allowed Jim to use. However it wasn’t until the late 1970s that Jim again began working with clay. ‘There was a potter in everybody’s backyard then.’

In 1984 Jim did a diploma in ceramics at Otago Polytechnic but he felt that the traditional, Anglo-Oriental glaze work that was in vogue at the time wasn’t representative of what he wanted to do. ‘I wasn’t finding my own voice.’

The library at Otago Polytechnic and books about the works of ceramicists such as Milton Moon and Betty Wooden opened up a whole new world, liberating Jim to create the ceramics he envisioned but hadn’t seen around him. “I wondered ‘how do you do that?’ ‘How do you get permission to do that?”

In 1989 Jim spent another year at Otago Polytechnic and started to paint on clay and use cut out shapes – two distinctive aspects of his work today. “One day the penny dropped and I started to make figures and paint them with acrylic paint. It seems simple but it was a long time coming.”

The vivid colour and sense of drama that typify Cooper’s works recall aspects of comic book art. Cooper has said that he has been influenced by Robert Crumb (b.1943), the celebrated American underground cartoonist of the 1960s. The vitality of Cooper’s work also suggests that of contemporary West Coast artists, such as the American Funk ceramicist Robert Arneson (1930-1992). The Funk Art movement flourished in the San Francisco Bay Area between the mid 1960s and the mid 1970s and was characterized by offbeat humour and highly expressive imagery. Funk artists help transform clay from a crafts material to a more sculptural one.

Increasing attention Jim Cooper’s work received from 2000 onwards culminated in 2006 when Snowy from Cavy, an angstful cat, being given the Premier Award of the Norsewear Art Awards, one of New Zealand’s top art prizes. Subsequently Jim’s installation Sgt P, in which he recreated all the figures, dogs, cats and plants on the cover of the Beatles Sergeant Pepper’s Lonely Hearts Club Band album, toured major New Zealand museums in 2007-2008. Jim has held numerous solo exhibitions throughout the decade, including Peppermints and Incense, exhibited at the Dunedin Public Art Gallery in 2008.

Writing of Drug Jars and Vendor, 2009, Jim’s recent work that was declared Joint Winner of the 2009 Portage Ceramic Award, judge Scott Chamberlin, Professor of Ceramics at the University of Colorado said:

‘Jim Cooper’s ability is to look at something that is over-decorated, chaotic, wacky and crazy all at the same time and still bring it into something that talks about ceramics. The material aspects in the glazes, for example – runny, too thick, too colourful, so that many people might think it sloppy.

I think it’s anything but that. This man knows what he is doing and is quite an amazing technician. It’s very subversive of the old Anglo-Oriental tradition which I think is good. It is also ambitious in scale and for the context in which one might see it.’

Jim has an MFA in ceramics and until recently, taught at Otago Polytechnic, Dunedin. He is now concentrating on his art making full time and from January to July 2010 was the first Artist in residence at the prestigious Taipei County Yingge Ceramics Museum. The installation of new work that resulted was a highlight of the 2010 Taiwan Ceramics Biennale (July 2-August 15 2010).

For his first appearance at Martin Browne Contemporary, in the gallery’s 2009 Summer Exhibition, Cooper created a menagerie of 30 dogs, cats and various animalia hybrids. This year Martin Browne Contemporary is thrilled to host a recreation of Cooper’s enormous Taiwan Ceramics Biennale installation. With its serried ranks of people, dogs, cats, flowers, birds, vases, jars and other paraphernalia, Jim Cooper gives a knowing nod to the ‘60s Summer of Love.